How effective teams are in an organisation depends on many complex factors. Context plays a much larger role than people think. What works in one situation does not necessarily work in another.

Some management books advocate an approach that works for all teams in all industries. This, however, is often an illusion – different teams within different organisations require different competencies. Managers often make the mistake of thinking that what works in context A will also work in context B.

An example of context and team performance

A healthcare organisation once had a lot of success with self-managing, agile teams: so much so that competing organisations soon copied the formula – to their detriment. The reason for this was that the first organisation had specifically hired people who would thrive within self-managing teams – individuals who love responsibility and who desire independence – in short those who have the right personality to be successful with a high level of self- management. Employees within the competing healthcare organisations were not used to this way of working at all, and were moved into self-managing teams with limited change management. They performed better within the old, familiar structure and were not especially looking for more independence and responsibility. Remember: teams and organisations are self-selecting organisms. Before making significant team composition or structure changes, first measure the qualities of its members. An agile team is not successful because it is self- managing. An agile team is successful because it has the right composition.

How do teams emerge?

There are teams that are put together to work on something new – an unexplored area of the organisation, a new style of working or an experimental product. For such a new team, the organisation needs to be very focused on what types of people are needed to fulfil certain functions. Then there are teams that just happen to happen: a group of people perform related functions within an organisation and are suddenly seen as a team. Such a group of employees is typically more uniform, consisting of the same types of people who usually exhibit similar behaviour.

Building a high performing team – what can go wrong?

What often happens is that management decides to change their strategy without considering whether their employees can meet these new requirements. Some organisations formulate a goal and set out to achieve it, without realising that this goal may not be possible given the current structure or characteristics of their employees. In one context, a certain team can be successful and effective, but if that context changes, this effectiveness does not necessarily remain.

How do you know if a team has the right composition?

There are many ways in which a successful team can be put together. But research and experience show that it helps if a team consists of diverse members. Within Figure 1 – a team quadrant with two axes – one axis goes from steering and influencing to helping and accommodating, the other from structure to flexibility. These are qualities that should be equally distributed within a team. For example, you should not have too many dominant members, because they will all want to be in charge. 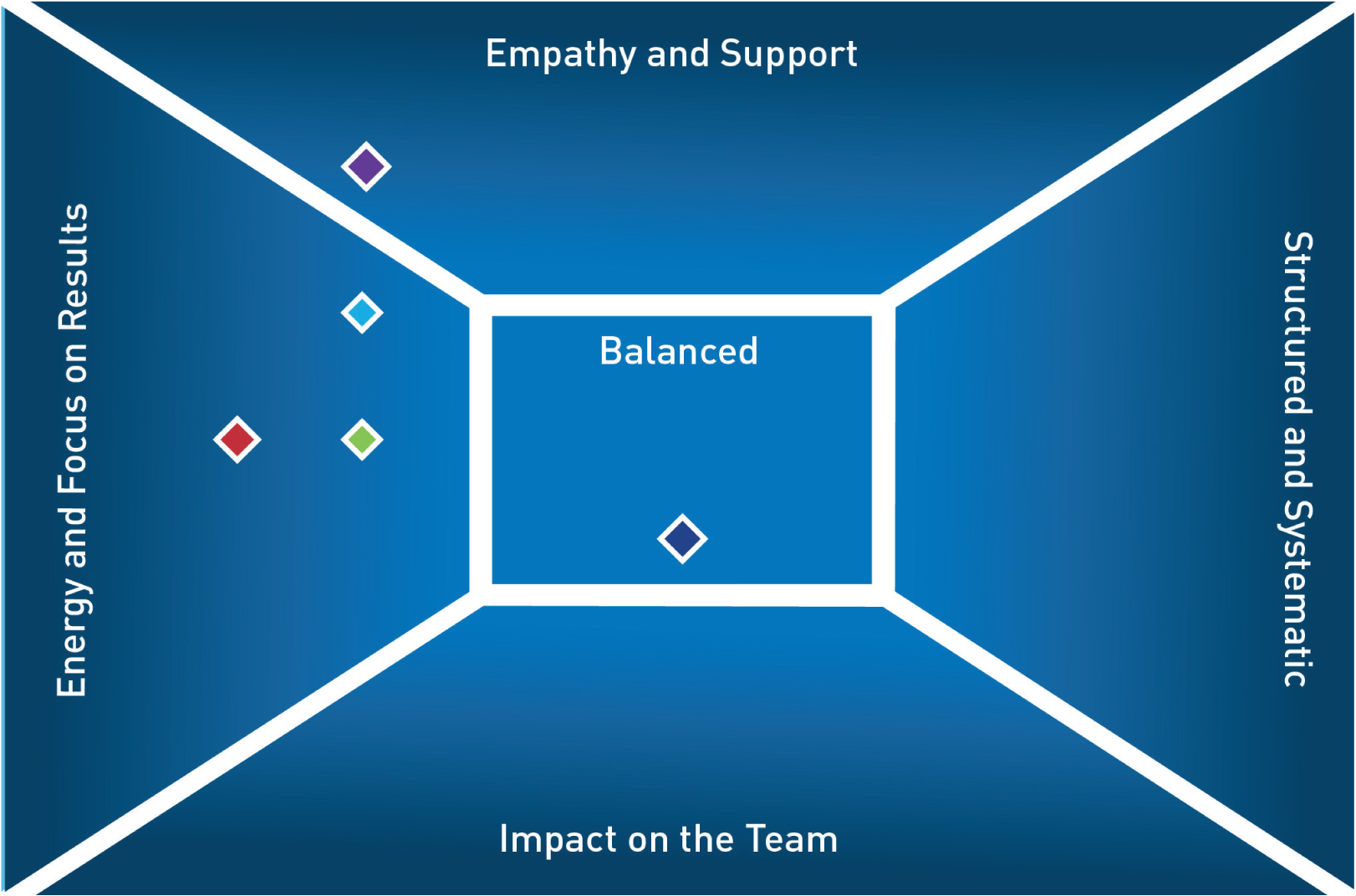 This sounds perfectly logical, but the pitfall is that people unconsciously seek out others with the same or similar characteristics (like attracts like). For example, a manager who likes structure, works systematically and wants to know what will happen tomorrow, will find it very frustrating to have to deal with an impulsive individual, who thinks very creatively, but who is also disorganised. The chance that he will add such a person to his team is not large. Yet time and time again, the research shows that the greater the diversity in the team, the greater the chance that it will be successful.

The organisational context and culture determine a lot. A self-managing team in a non-competitive environment, where people have to work together to provide a service, is very different from a high performing team in a competitive environment, where everything revolves around results. Using analytics from an organisation’s top-performing teams, one can predict the Learning Agility Success DNA of the group and determine which agilities “predict” success in their unique environment.

In which areas of Learning Agility play a larger role?

In team research across many different organisations, we have found that the Learning Agility dimensions of People Agility and Self-awareness have the most significant statistical relationship with team performance.

The relationship between People Agility and performance growth is best explained by the concept of team learning. In team learning, individuals not only use their own knowledge and ability to achieve goals, but also learn from and incorporate
the knowledge and skills of other team members. They are likely to use the unique experiences, talents and skills of teammates to solve problems and raise their own performance to a higher level. These individuals are likely to learn more than when a more individual approach to development is followed, because they have access to more resources.

Self-awareness has a slightly different relationship with performance. People with higher self-awareness demonstrate higher levels of self-management (self- development and feedback questions). Employees who practice self-management recognise both the need for continuous improvement of their own performance and the possibilities for doing so.

Jaintheran Naidoo is a registered industrial/ organisational psychologist with over 15 years of experience within the IO space. He has experience in various areas, including both the private and public sectors. His areas of passion lie in management/ leadership development, training facilitation and talent management strategy. His work has taken him around world, where he has facilitated HR interventions in countries such as Australia, Malaysia, Hong Kong and Mauritius.

Research & Papers
The latest insights into Learning Agility and team performance
Organisational effectiveness is achieved through team effort. Whether you are working with a temporary project team or a long-term team with a lot of experience, high performance depends on team cooperation.
Opinions
Do you know the communication styles of your team?
This team-building exercise requires no special tools and is a simple way to get to know the quirks and behaviours of your colleagues…
Links:
Contact us for advice
Learning Agility Assessments