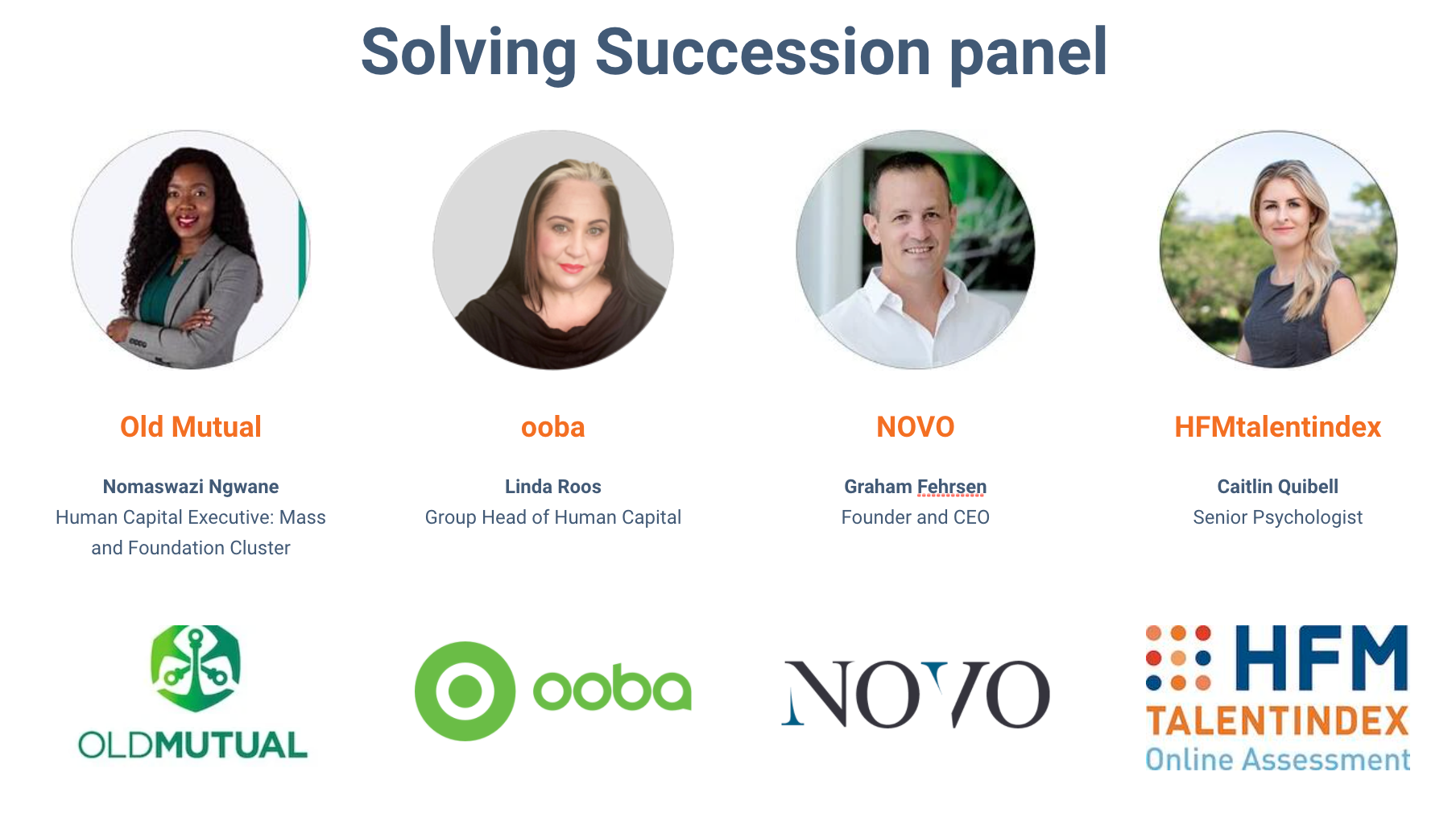 Key outcomes from the webinar:

A classic definition of Succession Planning is a structured process of identifying and developing talent in the organisation to fill critical roles.

Graham Fehrsen shared his definition from his experience as an executive coach: “It’s a long-term discipline, combining data-centric and human-centric approaches to create greater talent certainty, on one hand, and greater organisational agility on the other.”

"Succession is a long-term discipline, combining data-centric and human-centric approaches to create greater talent certainty, on one hand, and greater organisational agility on the other.” - Graham Fehrsen

Caitlin Quibell, HFMtalentindex’s Senior Psychologist, noted that although succession planning can seem like an overwhelming process, it can be broken down into three main questions: “Where is our talent right now, where do we want them to go in future, and how do we get them there?”

Succession planning is a risk mitigation strategy and ensures sustainability

According to Nomaswazi Ngwane, HR Executive at Old Mutual’s Mass and Foundation Cluster, organisational agility and sustainability are two of the main goals of succession. “Look at the last 18 months; organisations needed to be agile to deal with all the changes that have taken place. When thinking about the sustainability of our businesses, it becomes critical to have a plan and to understand the position the organisation takes in terms of talent during times of need. If we reflect on the need for effective transition of leadership and critical roles, from a sustainability and continuity of business perspective, you put yourself at a massive risk if you don’t start to plan for talent.”

Nomaswazi Ngwane also noted that the employee value perspective should be top of mind when considering your succession plan. “We see fewer people choosing formal employment. Millennials want to work cross-functionally and cross-industry. Employees also evaluate what their development plan and career path look like. It’s important that organisations respond to these needs to be competitive in the market and globally.”

"From a sustainability and continuity of business perspective, you put yourself at a massive risk if you don’t start to plan for talent.” - Nomaswazi Ngwane

Nomaswazi’s views were echoed by Linda Roos, Group Head of Human Capital, who spoke about ooba’s goals for succession planning. “It’s really a risk mitigation strategy to ensure you remain profitable and sustainable. In our business, two important areas driving the succession agenda are the relationships that our people hold and the very scarce niche skills in some roles. Mission critical roles need to be identified in your business. If you can’t fill them quickly, there are significant ramifications for your business in terms of productivity, reputation, risk and relationships.”

Graham Fehrsen shared the impact of effective and ineffective succession from the perspective of leaders. “When it’s well executed, people have a plan on how to take up their new leadership roles and what’s expected from them. When it’s not well done, the new leader can feel spun out and unclear about how to get from A to B. Organisations can lose direction in this process and executives can drown themselves in figuring out how to take up their new role.

He added, “Succession isn’t only about risk mitigation. It’s also an opportunity to think about the future and do some scenario planning. If you want an organisation that is agile and able to adjust, succession helps you to consider what talent will help you achieve these goals. People want growth, flexibility and opportunity. If you can’t help people think about their future in your business, you can end up with employees who feel stuck, who don’t want to be there or who don’t think the organisation believes in them.”

Succession plans need to address the immediate, short and long-term needs of the business

From her experience working at some of South Africa’s largest organisations, Nomaswazi Ngwane shared the ratio approach often followed for succession. “When thinking about ratios for how many successors you want for each role, you need to look at the immediate horizon (0 to 6 months), the short-term (6 to 18 months) and the longer-term (18 months+). In calculating the ratios, as an example, immediately I would need one successor for the role, in the short-term perhaps two, and in the longer-term three – depending on the preferences of the organisation. These ratios allow you to be deliberate about planning for the long-term and also give you a timeline to commit to.”

"Mission critical roles need to be identified in your business. If you can’t fill them quickly, there are significant ramifications for your business in terms of productivity, reputation, risk and relationships.” - Linda Roos

Nomaswazi Ngwane also added how Old Mutual’s succession process has evolved from a linear approach: “We’ve moved from a job family perspective to a clustering methodology that starts to talk about the skills of the future. This forces us to look beyond roles to see where else we can get talent from and how we can look at skills holistically.”

“Many organisations still use paper-and-pencil assessments or Assessment Centres, for example. It’s important to modernise these approaches and bring them online to be able to effectively measure talent and reach people in different geographic locations. And then, if this online approach is going to become permanent, and change is only going to accelerate, what sort of individuals do we see as the talent of the future? There’s a lot of research on future skills and competencies. One way that we look at this is by focusing on Learning Agility, in other words, how effective individuals are in the face of change and new challenges.”

"Succession planning is only as successful as the needs that it solves, from an individual and organisational perspective. Keep that in mind as you design or improve upon your process. What needs do we want to solve, and how are we going to go about it?" - Caitlin Quibell

Linda Roos added that she sees on-the-job development as a challenge in the virtual workplace. She also shared more about what ooba looks for in their talent and how smaller organisations can approach succession: “We have partnered with HFMtalentindex to understand the lay of the land of our talent, in terms of skills, competencies and capabilities. We focus on getting a good understanding of who and what we have in the organisation, and place a strong emphasis on Learning Agility. Bigger organisations often have bigger budgets and the ability to assign dedicated resources to succession. In smaller organisations, it can be more challenging and not every business has an HR professional. However, if you don’t have the luxury of money and resources, you can still go it on your own. There are lots of resources out there to support and guide you with very simple frameworks.”

Diversity and transformation are key considerations in the South African context

South African organisations often debate how best to include diversity and transformation in their succession planning process. This topic is one close to Nomaswazi Ngwane’s heart, and she shared her take on it.

“The South African context is a special one. Research tells us that diverse organisations perform better. For example, if you look at the top 500 companies globally, you’ll see the diversity of their boards. Part of your succession planning mission has to be building diverse teams. Yes, legislation is a part of it, but you need to have all the voices necessary in the room – this makes such a difference. It gives your organisation the right mix of perspectives for problem solving, decision making and innovation, to stand apart from competitors.

Most organisations take an unstructured approach to succession

The results from the recent State of Succession survey showed that, while 99% of respondents see succession as a critical business need, only 19% adopt a structured and consistent approach. Similar results were seen when delegates at the Solving Succession webinar were polled.

52% of the audience indicated that they don’t engage in succession planning or do it reactively when the need arises. 41% shared a need to improve upon their process, while 7% were happy with their current approach. These findings show that succession is an area of concern for South African organisations and that there is a generalised need to introduce more structure into their process.

The biggest barriers to succession are process, buy-in and budget

South African organisations indicate the need to improve upon their succession strategy. This was echoed by the delegates at the Solving Succession webinar, with the majority noting that a defined process, or lack thereof, was their biggest barrier to effective succession. This was followed by buy-in from leadership and knowledge.

Similar trends were seen in the State of Succession survey, with budget and objective data also being highlighted as barriers. 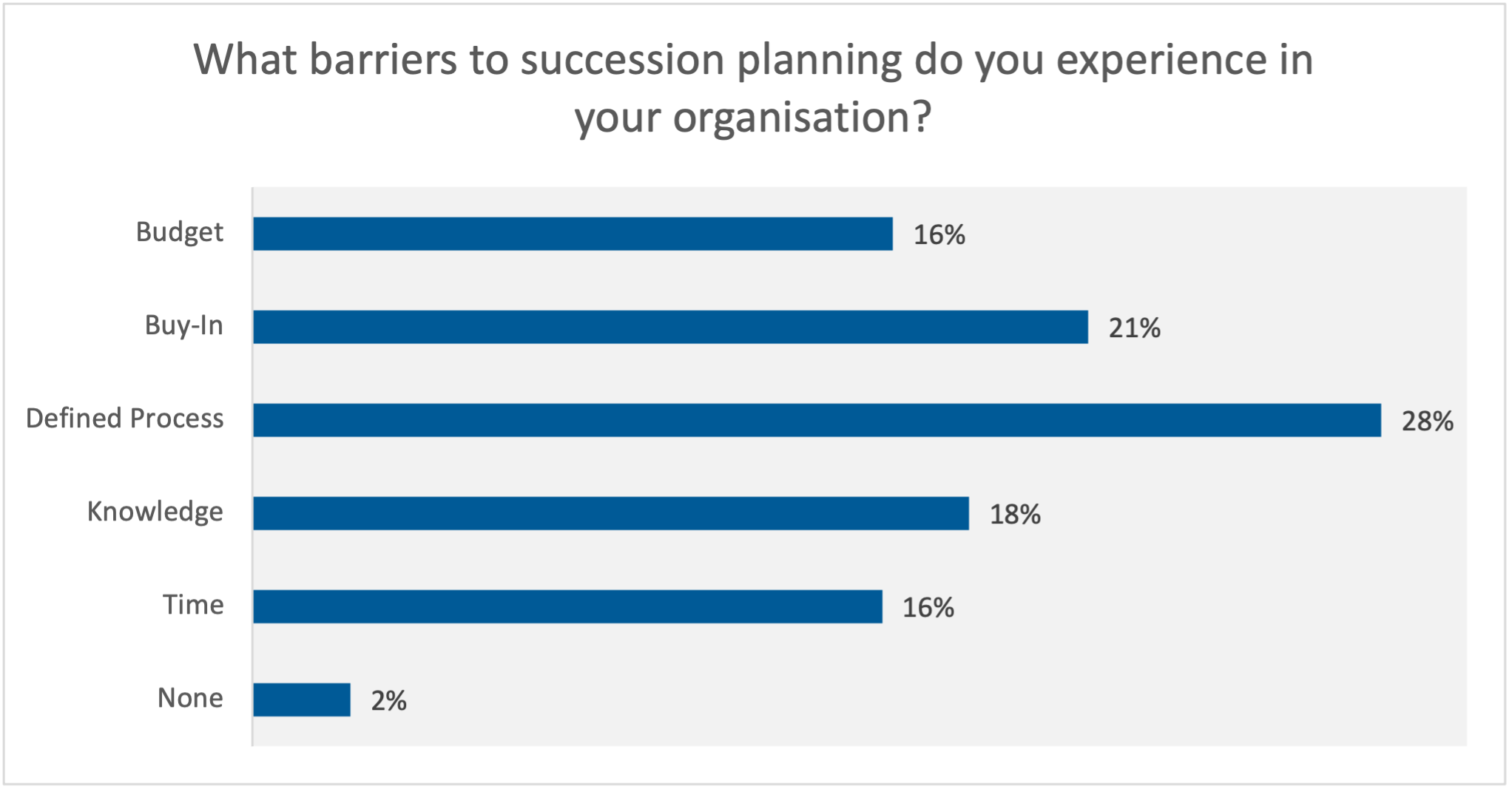 Nomaswazi Ngwane is steeped in experience in the field. With an education in Human Resources and a Master of Business administration, Nomaswazi is the Human Capital Executive: Mass and Foundation Cluster of Old Mutual. Before Old Mutual, she held senior and leadership roles at Discovery, Anheuser-Busch InBev and South African Breweries.

Linda Roos has a breadth of experience, from various board and committee positions, including NGO's, to presently leading the Human Capital group of fast-paced loan specialists at ooba. Linda is well known by her colleagues in the industry for her insightful approaches to building HR programmes.

Graham Fehrsen has traversed many roles, from people leadership positions at Bowmans to being the catalyst as the original Managing Director of CHRO in South Africa. Graham founded Novo in 2009 to focus on maximising value from transition by coaching and collaborating with leaders.

Caitlin Quibell has held the role of Senior Psychologist at HFMtalentindex since 2016. She has a long history of experience specialising in talent management, consulting, research and assessments. As a registered Research Psychologist, her areas of interest lie in cutting-edge assessment science and helping organisations optimise their talent management strategy to obtain real business outcomes.

Events
The ultimate guide to succession planning and leadership development
This is the HFMtalentindex ultimate resource on solving the succession planning puzzle, setting the direction for effective development and growing future leaders
Events
Solving Succession Planning: See the questions and answers from the webinar
See the answers to the audience questions from the Solving Succession webinar, on where to start, how to get buy-in from leaders and more
Determine your succession risk
360 Degree Feedback