As a large retailer in a competitive market, PEP is constantly striving to make sure they are a learning organisation. Therefore, Learning Agility has become a core part of the selection, learning and development initiatives at PEP. Find out more about the company, their unique culture and how they are striving towards developing the leaders of tomorrow using Learning Agility.

“Learning Agility is something that can make us successful, no matter how bad times are”
Pat Smith, Talent Management Manager

Middle managers at PEP are nominated by the leaders of the business to participate in the SMDP programme and are then taken through a number of assessments. Those who are chosen to go through the 18-month programme are known as the “go” group, while those who were not selected in the current year are known as the “no go” group. Because the final “go” group size is quite small, the assessment process is fairly competitive.

In 2015, PEP initially decided to include Learning Agility in their SMDP assessment toolset as an external validation of their selection process. They wanted to determine whether their battery of assessments was accurately predicting both agility and future potential amongst the SMDP shortlisted participants.

The result was astonishing. Not only did Learning Agility predict the selected (“go”) and not-selected (“no go”) groups extremely accurately, but it also answered a lot of questions about ambivalent cases where other information was not conclusive. 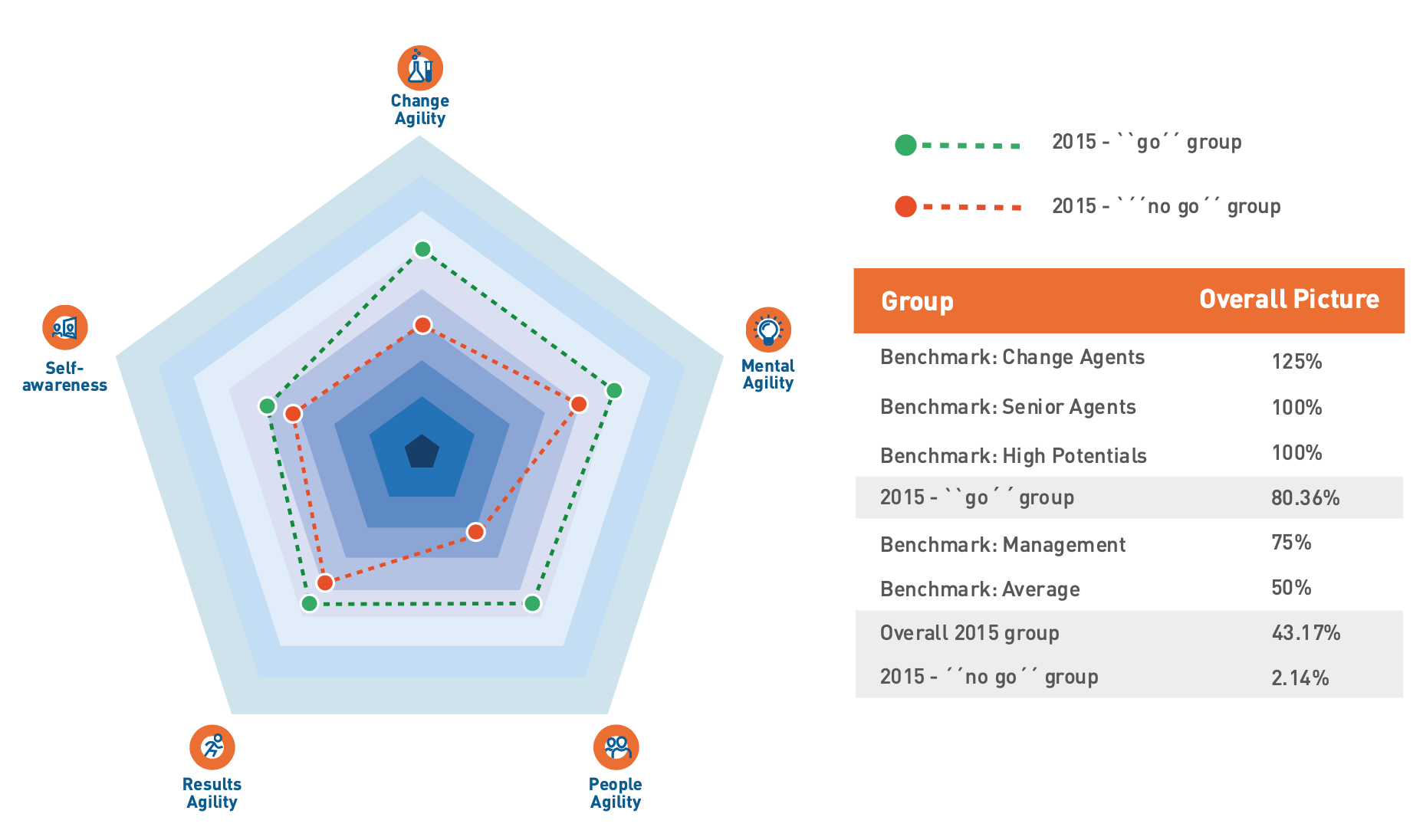 The 2015 “go” group in the figure above is depicted with the dotted green line. Overall, this group performed significantly higher than the “no go” group (orange dotted line) on Learning Agility.

2017: Learning Agility as an integral part of the leadership culture

Two years later: discussing and educating the leadership about the importance of Learning Agility has created a natural focus on agility in the business. The Learning Agility of managers became a core part of the 2017 SMDP selection process. Agility was actively focused upon and targeted in the nomination phase; this is reflected in the results of the participants. 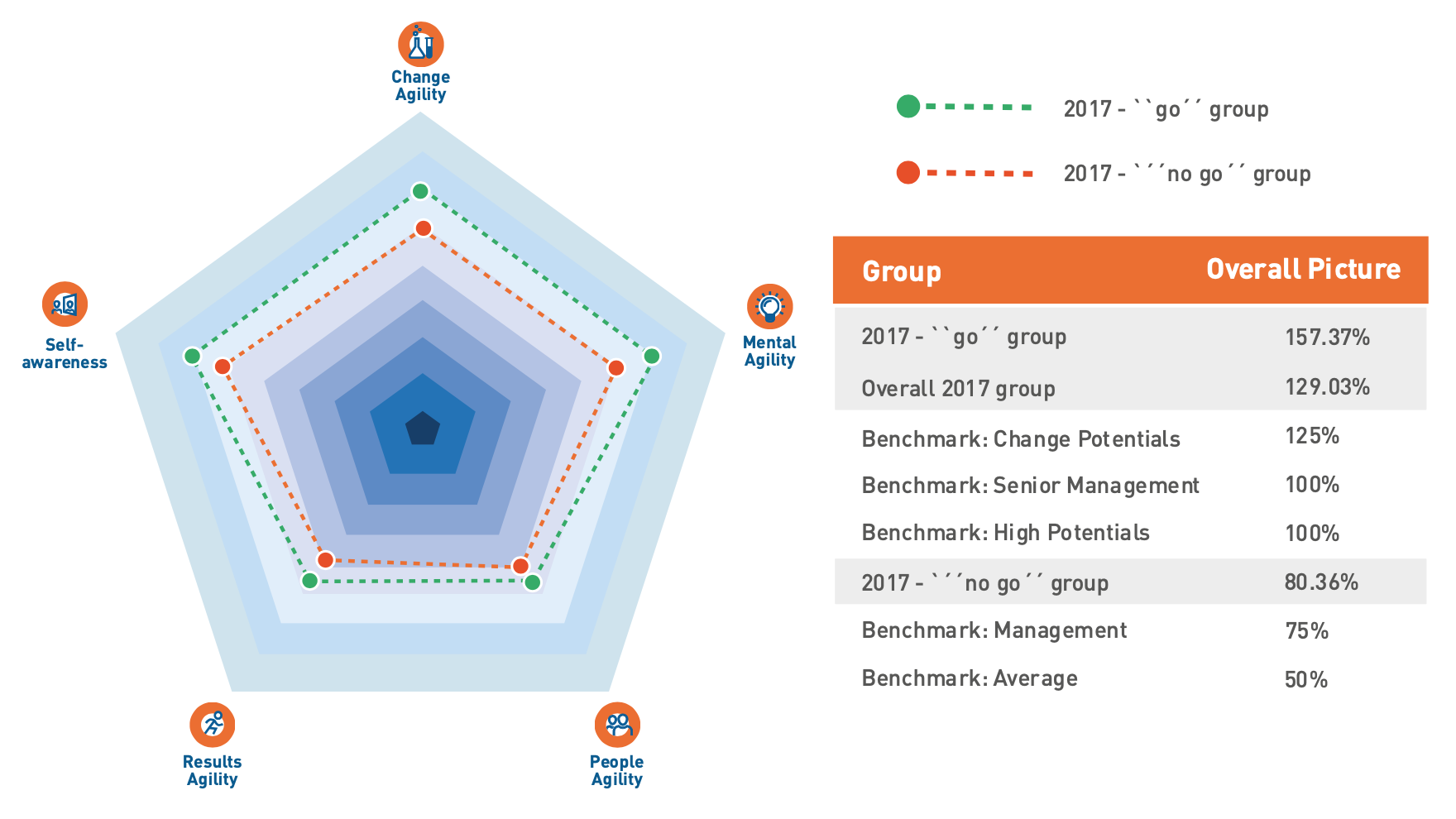 Whereas in 2015, the overall level of Learning Agility was just below average, in 2017 the group of shortlisted participants demonstrated much higher levels of agility. This emphasises the fact that an active focus on an agile culture helps people to identify learning agile behaviours and develop these amongst themselves and their team.

Following up on the long-term success of SMDP participants

Learning Agility is a predictor of high performance, both now and in the future. As part of the focus on agility within PEP, research was conducted to find out the long-term prospects of employees who successfully completed the SMDP programme.

By comparing the “go” and “no-go” groups for 2015, results showed that the successful group were far more likely to experience career growth in the form of promotions or career mobility.

The “go” group – with higher Learning Agility – were more likely to be promoted or receive career mobility opportunities.

While the 2017 participants have not quite finished the programme, the initial analyses are promising. We see little to no change amongst the “no go” group, and a significant proportion who had already been promoted within the “go” group.

2017 SMDP participants – where are they now?

The higher Learning Agility of the “go” group is reflected in the number of promotions offered.

Overall, results clearly showed a strong relationship between high Learning Agility and career growth opportunities due to strong performance. As Pat Smith says: “It’s not just an assessment. It’s the way and how we are doing things. It is a verification. It is in the DNA of PEP.”